Recently I attended a talk by one of the founders of a relatively small charity called Refugee Support. As those of you who have read With Blood and Scars know, the novel is a homage to the Polish WW2 generation. I was so moved by the talk that I immediately went to see my mum, herself a former Polish refugee, to ask her how the experiences of the today’s refugees mirrored her own.

I was struck by one of the things she said, totally unprompted, about how she and her family were treated back then in the Koja camp in Uganda, and how it reflected Refugee Support’s ethos and mission statement. Mama said : “To jest bardzo ważne żeby człowiek miał poczucie szacunku dla samego siebie.” (It is very important that a human being should have a feeling of self-respect.) More about that shortly.

This is exactly what Refugee Support focuses on – respect and dignity. #Aidwithdignity Being a relatively small charity, the members are less encumbered by the rules, regulations and bureaucracy of large NGOs. In a crisis situation, if they have the funds, they can act quickly. And sometimes when they don’t have the funds, they even dig into their own pockets.

It’s all been a learning curve for them – knowing how to meet the refugees’ needs. This is how they deal with distributing food, for example.

Their projects include Alexandreia, Filippiada, and Katsikas camps in Greece. Please check out the charity’s achievements on their page http://www.refugeesupport.eu/ Not only do they need donations, they also need volunteers. So, if you have a few weeks to spare and want to help, the website shows how you can apply and what volunteering involves. There is a lower age limit of eighteen, and no upper age limit, assuming you are in good health.

I have included some photos of Syrian refugees’ experiences here to compare and contrast with Mama’s experience and also her reactions under the photos.

Still to this day many Polish people of this generation don’t know that there were Polish refugee camps all over the world, nineteen of them in Africa, including Koja – where Mama was, Tengeru and Masindi etc, and also in India, for example, Valivade and Balachadi. More on this interesting subject at: http://kresy-siberia.org/museum/ If you have relatives who were deported to Siberia, you will no doubt find at least some on their records.

Returning to dignity and respect. As we sat and chatted, Mama described Koja and drew that little sketch for me, unaided by her glasses, as you can see. One of the things she remembered vividly was when the famous Polish pianist Witold Małcużyński gave a concert at Koja camp. There was almost a riot to attend and get that longed-for taste of home. https://en.wikipedia.org/…/Witold_Ma%C5%82cu%C5%BCy%C5%84ski

Dignity also came in the form of education, activity, scouting, the possibility of retaining the Polish culture, whether that be sewing and wearing the Polish national costume, or printing school text books in Polish. Mama recalled the name of her first teacher – Pani Kwaśna! For those of you who don’t speak Polish – a rather unfortunate name – Mrs. Sour. Apparently, she was very nice though.

They also had a cinema of sorts in Koja – a screen in a big room where mainly pre-war Polish films were shown.

She mentioned a wonderful day when the Ugandan guides and scouts invited their Polish counterparts to a party. It was, as far as she can remember, held in some huge factory space. The Ugandans had decorated the place most elaborately to greet their Polish brothers and sisters in scouting. “Very fancy to było. Pięknie.” (It was very fancy. Beautiful.)

She recalled a scout camp when a kind of moat was dug out around a baobab tree. Everybody sat on the edge in a circle eating their dinner on their laps. They sang songs afterwards. Even though they were in refugee camp, they had a childhood and youth. Dignity and respect.

Mama clearly remembers aid parcels arriving from UNRA and what joy they would bring. Excitement all round. When she first had the opportunity to consider charitable donations, she had no idea how to set up donations to UNRA, so she opted for the Red Cross, another charity that featured in their lives in those times. She believes in “passing it forward.” Kind strangers helped her and her family; now it’s her turn to do the same.

Mama and her family spent six years in Koja, waiting for the war to end, although, she said, that after Yalta, many people knew they could never go back home to Poland, to their homes, because *their* Poland and *their* homes no longer existed.

She asked me to mention her neighbours and friends from Koja in this post in case any of them or their descendants should see it; the Niewiarowski family, the Lezgold family, the Berlinski family – Mirek in particular, and a special thank you also to Danusia Osmakiewicz who, apparently, was so fond of Mama that she did her homework for her! Wstyd. 😉

Mama is becoming frail; she has a very painful back condition. She can’t stand for very long and walking any distance is tricky. Finally, I asked her whether – if her health were better – she would come and help us at Care UK Charity Refugee Aid to sort and load aid parcels into containers destined for the camps. Her answer was “ Oczywiście. Bez tej pomocy od innych ludzi nie przeżyłabym wojnę.” (Of course. Without the help of strangers I would never have survived the war.)

Please share. Refugee Support are doing truly wonderful work. Please help them in any way you can. 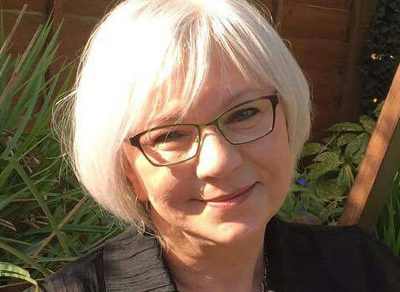